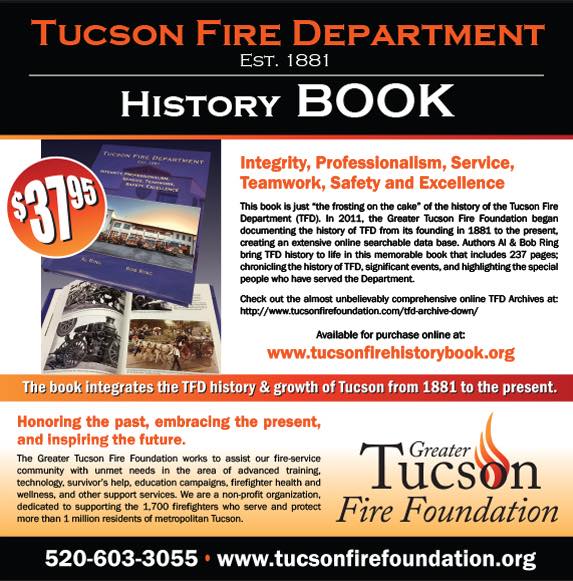 This section contains photographs, official reports, articles and other information documenting the growth of firefighting in Tucson, Arizona.

In 1881, residents of the our hardscrabble, Old West town were protected by a loosely organized bucket brigade – local men equipped with little more than rubber buckets, axes and shovels. Over the years, the department would grow to include simple, hand-drawn hook-and-ladder equipment; rugged, horse-drawn engines; and eventually, motorized trucks.

Information in these archives has been arranged by subject, or in chronological order. Documents were collected, organized and entered into a computerized database by Al Ring, a Tucson historian and friend of the department; with assistance from Dave Ridings, a retired Tucson Fire assistant chief. We would also like to thank the Greater Tucson Fire Foundation, and the many friends and fellow firefighters who made this project possible. 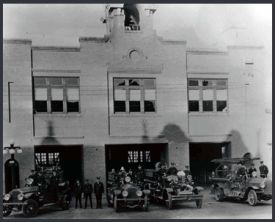 While all graphics have been improved for optimum screen resolution, the reader should remember that many came from original documents, such as letters, station day books, and old newspaper articles. If the document source is available, we list it. Many items, unfortunately, were not originally identified, and we are unable to provide more detailed information. In the case of newspaper articles, however, about 99 percent would have been from three possible sources: The Arizona Daily Star, The Tucson Citizen and the Tucson Daily Citizen, for which we want to give a special thanks. Please use this information as a reference tool only.  If the reader uses any information for any purpose other than a reference tool, please seek permission from the source. Should the reader have additional information, we would appreciate you sharing it with us. Assistant Chief Joe Gulotta: Joe.Gulotta@tucsonaz.gov Assistant Chief (Ret.) Dave Ridings: dsridings@gmail.com Historian/Archivist Al Ring: ringal@comcast.net The tolling bell that you hear on this page is a real fire bell. It was purchased by the Tucson Volunteer Fire Department in 1881, and is still in service. It is housed in the bell tower at Fire Central – Tucson Fire Department’s downtown headquarters – and used for ceremonial duty.

Throughout most of history, the life of a firefighter has been closely associated with the ringing of a bell. As he began his hours of duty, the bell started the shift. Throughout the day and night, each alarm was sounded by a bell, calling him to fight fire and to place his life in jeopardy for the good of his fellow man. And when the fire was out, the bell rang out three times to signal that the incident had concluded.